Yuri Mylis
Follow
Important: The legacy Salesforce Integration was set to be removed on January 30, 2020. We’ve heard that some customers may need more time to prepare for this change, so we are proactively offering extensions to this integration until May 15, 2020.

For any account that would like an extension, please fill out this form before March 11, 2020 noon (PST) to ensure your extension request is processed. Read the announcement about the removal of the legacy Salesforce Integration and timelines here.

If you do not have a Salesforce Edition with API rights, you can:
Try the Workato Salesforce to Support Integration
Try Zendesk Sell with its native integration to Zendesk Support

Zendesk and Salesforce have fundamental differences in the way they store users. In Zendesk, each user must have their own unique email address. This is not required for Salesforce contacts.

To overcome this difference, and to make it possible to sync multiple Salesforce contacts that share a single email to Zendesk Support, the integration uses a feature called multi-organization.

With multi-organization, separate Salesforce contacts that share the same email address, but belong to different accounts, can be connected in Zendesk Support to a single user belonging to multiple organizations.

Understanding the multi-organization syncing process and its elements

Enabling the multiple-organization feature in Zendesk impacts both ongoing and bulk syncing, as well as sending tickets to Salesforce.

How Zendesk Support and Salesforce users, contacts, leads, accounts, and organizations correspond to one another, and how they are synced when there is overlapping information, can be complicated.

The syncing record is an important concept for understanding how multi-organizationsyncing works. It is the main Salesforce record, when multiple contacts/leads share a single email address, and referred to by a Zendesk user account during syncing.

Any other Salesforce contacts/leads that share an email address with the syncing record are called Duplicate records.

When creating new records in Zendesk during bulk sync, if duplicate Salesforce contact/lead records are pushed to Zendesk for creation, only the first record will be identified as the syncing record. The rest of duplicates will be used to set new organizational membership for the user in Zendesk. This depends on whether multi-organization support is enabled in Zendesk and will be linked to the Zendesk user created by the syncing record.

When multi-organization syncing is ENABLED:

When multi-organization syncing is DISABLED:

The following table shows the different actions when multi-organization syncing is enabled and disabled:

The following scenarios may help you understand what happens during syncing when organization support is enabled:

The Zendesk for Salesforce integration automatically detects whether multiple organizations are used in your linked Zendesk instance and takes advantage of it if available. When the multi-organization feature is enabled in Zendesk Support, you’ll see a message on both the Contact/Lead mapping page and the Bulk Sync page:

Bulk sync auto matching follows the same logic as ongoing sync -- it will identify the syncing record if the same email already exists in Support. The syncing record will be used to create/update the Zendesk user and, depending on whether the multi-organization feature is enabled in Zendesk.

In the event of multiple contacts/leads that share the same email address are identified as syncing record, only one of them will be used to create/update the Zendesk record.

Due to Zendesk using email as the unique identifier of a user, an email address will be the default bulk sync auto matching criteria for contacts and leads and can not be removed. However, users can still add two other matching criteria.

Ticket will be assigned to the contact that has the same relationship to account as the ticket requester’s relationship to its organization. If no such contact can be found email address will be used to query Salesforce for the contact, if more than one contact with the same email address found in Salesforce, no contact will be linked to the ticket and a warning will be created in the log.

Tickets viewed in Salesforce Account/Contact/Lead show, by default, tickets belonging to the linked organization and user. With multi-organization membership, records are filtered out according to the membership organization.

When a duplicate record is found during syncing or ticket-sending, a warning message appears in the Zendesk log. 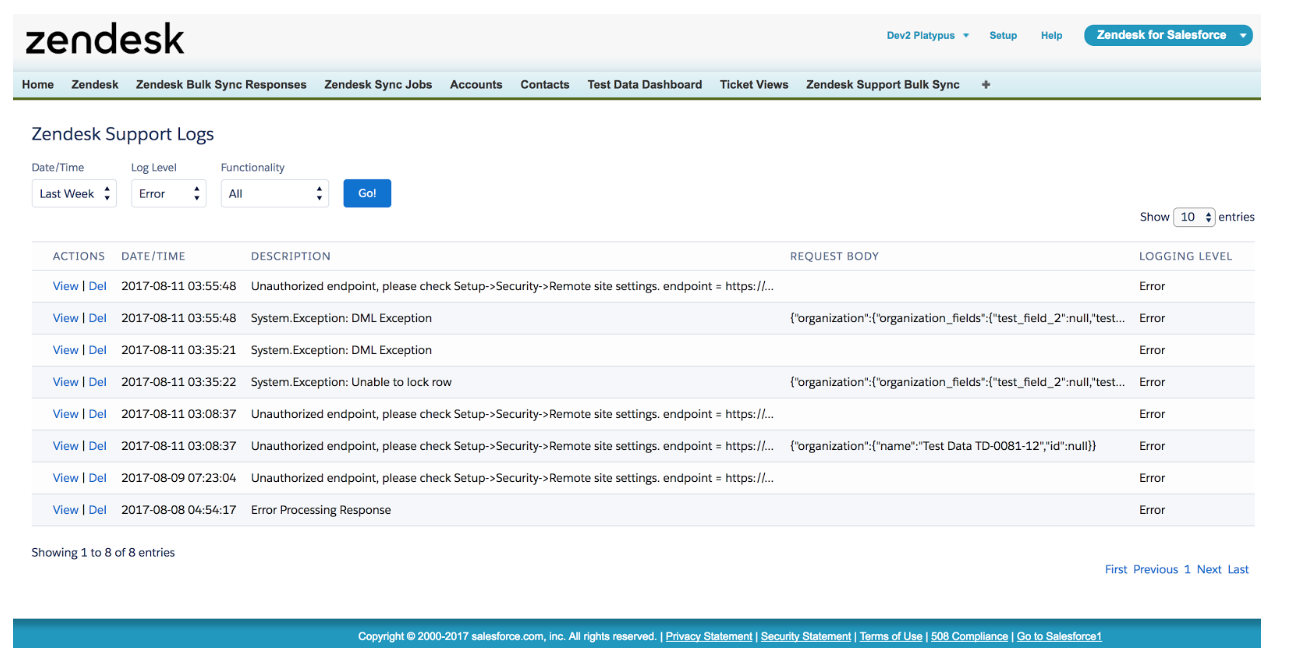 You may see warnings in the following situations: