If you have not enabled Insights, see Enabling Insights for yourself. If you are an Enterprise agent in a custom role, you might not have access to Insights, depending on how your admin set up your custom role.

This article covers the following topics:
Tip: If you want to learn more about reports on your workflows, tickets, and users, check out the Metrics and Analytics: Intro to Insights training course.

You can create new reports using the Report Editor. You can either create a new report in Insights or from an existing dashboard.

To create a new report in Insights

To create a new report from a dashboard 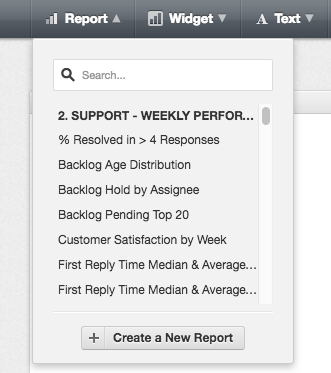 You will automatically be redirected to the Report Editor.

The Report Editor contains three panels, What, How, and Filter. In the What and How panels, you will select your data. For information on adding filters, see Filtering your report.

This section contains the following topics:

Insights is built on a data model that represents all the data sent from your Zendesk Support to GoodData for your Insights project. All of the objects in the data model represent pieces of data that you can use to build custom reports.

This conceptual graphic is a high-level representation of the Insights data model. The green boxes represent the data sets in the data model. 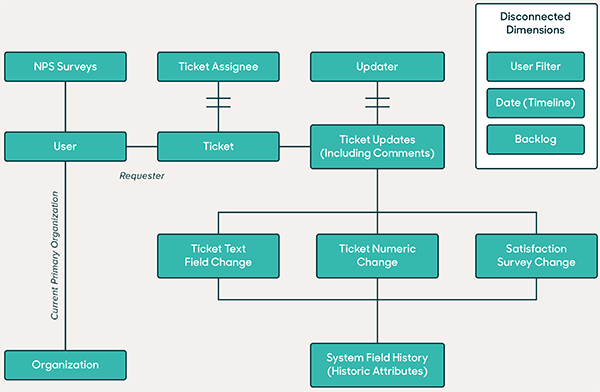 You can view the detailed data model, including all of your custom fields. Viewing the data model helps you understand the relationship between items and what you can report on in Insights.

Note: You can also view an interactive version of your data model. Sign in to Insights in Zendesk Support, go to GoodData labs, and then click LDM Visualizer. However, keep in mind that the LDM Visualizer app belongs to GoodData and isn't supported by Zendesk. We can't fix bugs that you may encounter with this app.

To see the data model

Adding metrics in the What panel

Your metrics include all of your quantitative data, such as number of tickets and wait times. Metrics represent what your report is made from, so they are added in the What panel. This section only discusses how to add pre-built metrics. For information on adding custom metrics, see Creating custom metrics in Insights.

To add a new metric When you are finished selecting your metric, you can either click the How button or click Done.

Adding attributes in the How panel

Your attributes include all of your qualitative data, such as dates and ticket fields. Attributes are how your results are divided, so they are added in the How panel. Depending on the metrics you selected, you might not be able add some attributes. The folders' names containing unavailable attributes will appear gray. This feature prevents you from creating invalid reports.

To add an attribute

You can apply filters to limit your results to specific settings.

To delete your filters

If you want to add filters to your report, but do not want to show them, you can hide your applied filters.

To hide your filters

After you add your data and filters, you can customize your report. All customization options can be accessed by clicking Show Configuration on the upper right.

This section contains the following topics:

If you are using a chart type that contains axes, such as a bar or line chart, you can select the associated axis for each metric and attribute.

Your chart will automatically set your attributes and metrics at default locations. You can switch what axis your metrics and attributes appear on.

To switch metric and attribute axis

After you have selected your data location, you can edit axes and overall results formatting.

To edit axis settings
To edit chart settings In addition to the above customization, you can also select the order your results appear in by selecting a new sort option in Chart Sorting. If you did not enter custom formatting when adding your metric, you can change how your results are interpreted by clicking Custom Number Formats underneath Formatting. 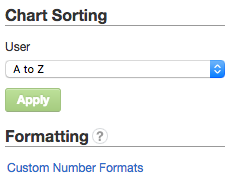 Note: If you hide an object you do not own, keep the link. You will no longer be able to view the report without it.

) is shown at the top of the report.

You can share a hidden report by sending editors a link to your report. For more information on sharing reports see, Sharing reports in Insights