When you enable CSAT (customer satisfaction ratings), end users are prompted to rate the support they received by answering a brief survey indicating whether they were or were not satisfied.

Note: CSAT for web and mobile messaging is only available to customers with Agent Workspace enabled on a Zendesk Suite plan or a Zendesk Support plan plus a Chat plan.

You can also enable satisfaction ratings for live chat interactions, though these are managed separately, through your Chat dashboard. See Measuring visitor satisfaction with chat ratings.

You must be an administrator to enable customer satisfaction ratings.

For more information about CSAT and how it works in the Support and messaging channels, see the following articles:

For details about the automations and triggers created during enablement, see About the CSAT business rules.

To view your customer satisfaction ratings and score, see Viewing your Customer Satisfaction score and ratings.

About the CSAT business rules

When CSAT is enabled, business rules are created to send the surveys to your end users. In this section, we'll discuss the following:

Understanding the CSAT automation for Support

Note: Remember that the condition statement is Hours since solved is 24 not Hours since solved greater than 24. This means that when you first enable customer satisfaction rating, none of the tickets that have been solved for more than 24 hours will generate a survey email. You can change this of course.
Tip: You might consider changing the number of hours after solved that you send out surveys to get more responses. Check out this blog post about maximizing survey responses.
You'll notice that there's a Ticket Satisfaction condition as well. This condition has the following values:

The unoffered value is used here because we only want to send the survey for tickets that have not already been rated.

The automation actions send the survey request email to the requester. 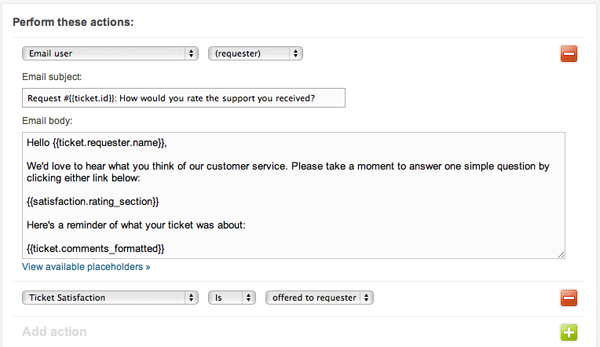 The {{satisfaction.rating_section}} placeholder contains the rating question and answer links. You can modify the surrounding message as needed. And as always, a canceling action is used to complete the automation; ticket satisfaction is set to offered to requester.

This automation can be modified to exclude tickets using many different criteria. For example, you might not want surveys sent for tickets assigned to a certain group or from a certain organization or for tickets containing certain tags.

Understanding the CSAT trigger for web and mobile messaging

The CSAT collection trigger for web and mobile messaging channels is created when:

This trigger, Request customer satisfaction rating (messaging), fires immediately after the related ticket has been marked as Solved, and presents the survey request to the end user in the messaging interface.

The survey sent by this trigger includes a rating component with Good and Bad options, as well as a comment component that is only displayed if the end user selects a rating option. These components can be ignored by the end user, if they do not wish to participate in the survey.

Below is an example of the web and mobile messaging trigger: 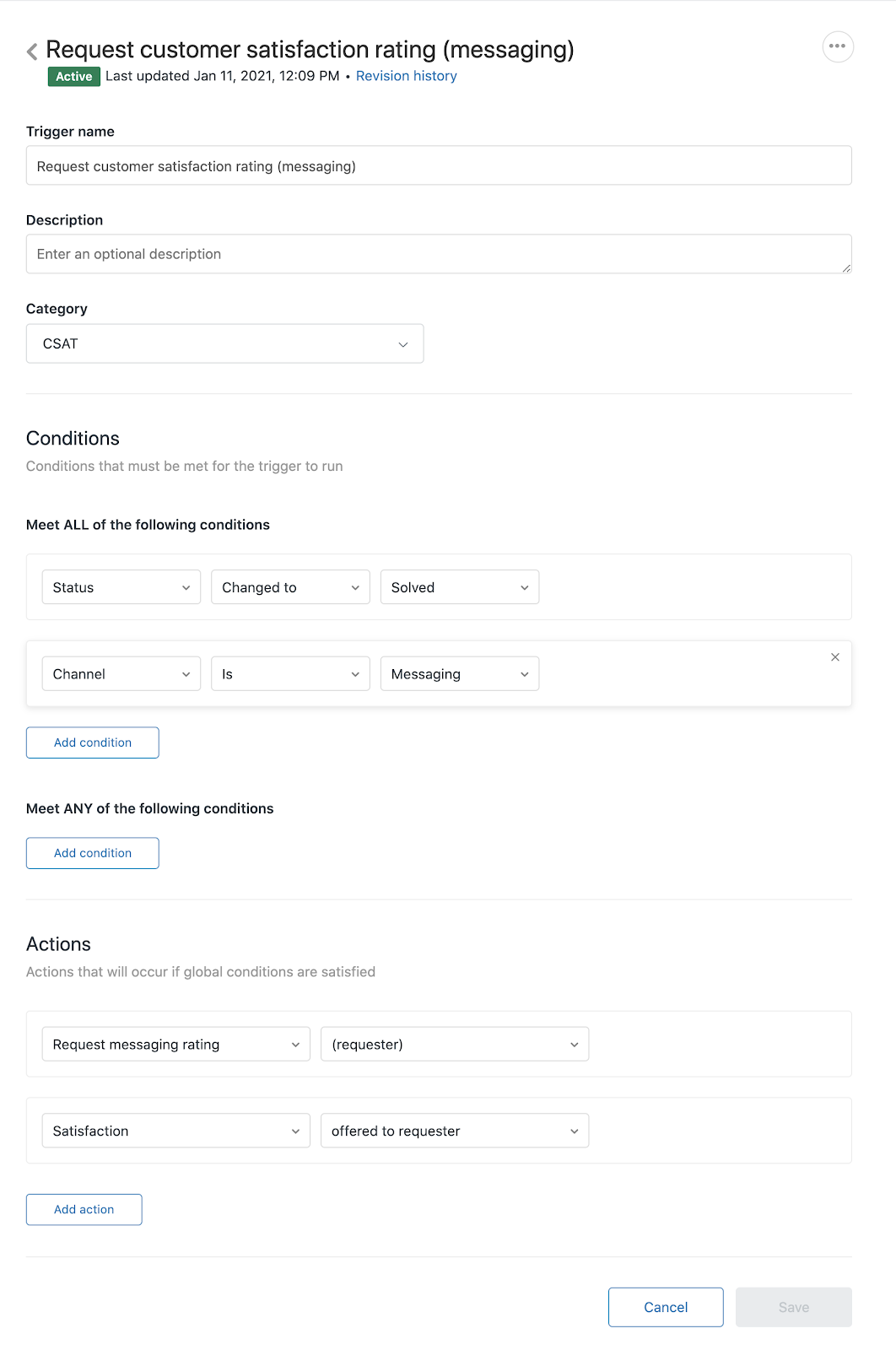 The CSAT collection trigger for social messaging is created when:

The trigger, Request customer satisfaction rating (social messaging), fires immediately after the related ticket has been marked as Solved, and presents the survey request to the end user in the messaging interface.

For social messaging, When the criteria above is met, CSAT is enabled for the following social channels that have been added to the Agent Workspace through the Messaging Admin Center page:

The survey sent by this trigger includes a rating component with Good and Bad options, which can be ignored by the end user if they do not wish to participate in the survey.

Below is an example of the CSAT trigger for social messaging: 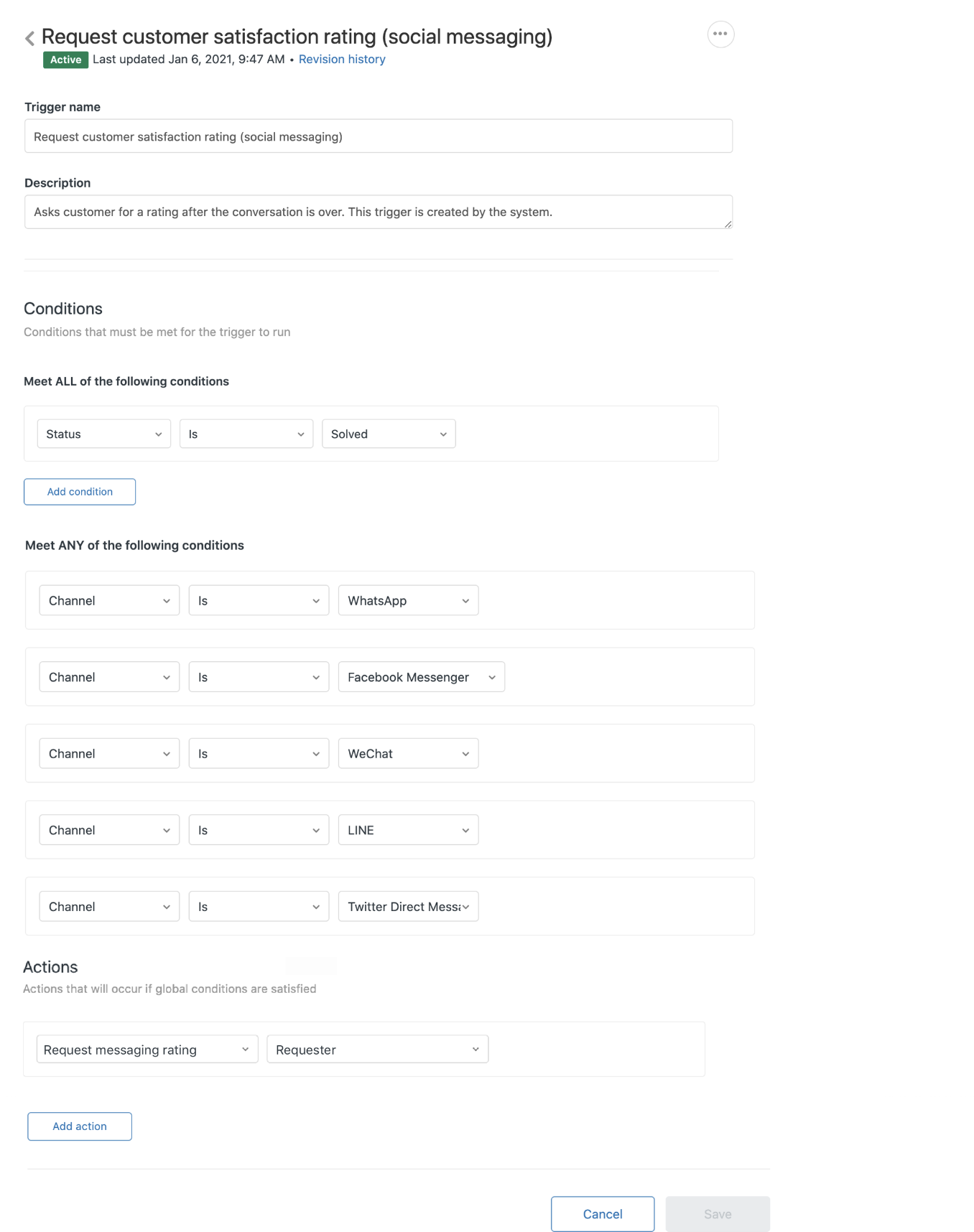 Placeholders are best used in triggers and automations. Inserting them into a macro or comment creates a plain text version of the CSAT request, which permits other users to submit a satisfaction score for the requester and requires end users to click the URL and sign in to your help center to complete the survey. Additionally, if you insert the {{satisfaction.positive_rating_url}} or {{satisfaction.negative_rating_url}} into a comment, it can take up to 45 minutes for the rating to be updated in the ticket.

Aside from the placeholder mentioned above, {{satisfaction.rating_section}}, the customer satisfaction rating feature adds four other related placeholders. All of these placeholders can be used in various ways and are described in the following table.