This article describes how to make a conditional field a required ticket field. It also explains how ticket field and ticket form requirement settings in your admin settings affect each other. You must be an admin to make conditional ticket fields required.

This article includes these sections:

For example, here is what you see in your Ticket Fields settings. For example, go to Admin Center > Objects and rules > Tickets > Fields, and then open the ticket field for editing.

And here is what you see in your conditional ticket field settings. For example, go to Admin Center > Objects and rules > Tickets > Forms, and open the conditions for one of your ticket forms. 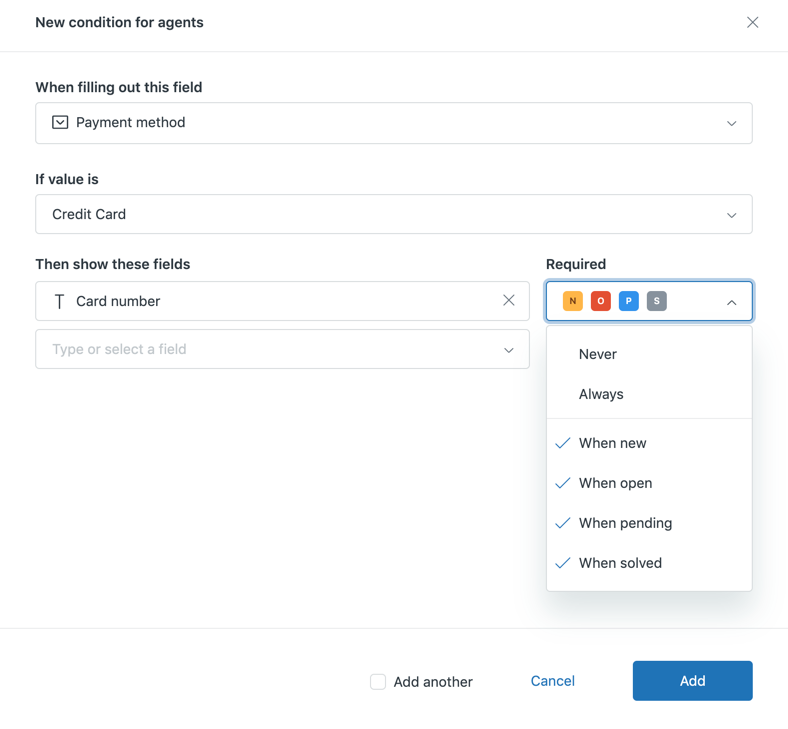 You can select these settings from your Ticket Fields admin settings.

You can select these settings from your conditional ticket field Ticket Forms admin settings.

Before you proceed, make sure you reviewed the rest of the information in this article and understand how ticket field and ticket form requirement settings affect each other.

You may want to open the ticket field for editing (go to Admin Center > Objects and rules > Tickets > Fields) and note whether Required to solve a ticket or Required to submit a ticket are selected.

Your agents may encounter situations where they try to submit a ticket, but they encounter an alert that states that a particular field is still needed. For example, something like this:

This can happen even though the field didn’t appear to be required, and may leave you and your agents feeling confused about why the alert appeared at all.

The default ticket behavior may create a circumstance where a field becomes required, even though it wasn’t originally marked in the ticket interface as required (with an asterisk).

If you have questions about default ticket behavior (sometimes called “inborn system rules”), we recommend that you review About inborn system ticket rules to get a better understanding about how they work.

Let’s say you have a group with only one agent in it. Then, you create a new ticket that is routed to the group by a trigger. The ticket status will automatically become Open (instead of New) and the agent will become the assignee (instead of the group).

If there is a conditional field that is required When Open, you will see an alert when you try to submit the ticket as New, if the required field was not filled out.