You’ll see the new composer when you add comments to new tickets, existing tickets, and when you make bulk editing changes to tickets. This change doesn’t include the macro editor at this time. However, once a macro is used in a ticket, the formatting changes are applied. You might consider proactively updating your macros to work with the new format when it's released.

This article has the following sections:

As we migrate functionality to CKEditor we’ve noticed some differences in behavior between the current editors in the standard agent interface and the new CKEditor technology. The purpose of this article is to provide you with the differences you might experience once your account is updated with the new technology.  Changes the new editor will provide include:

There are only a few differences between how formatting settings interact with each other in the current editors and CKeditor editor, mostly related to how formatting code is managed by CKEditor. Another behavior difference is that we do not support rich-text formatting inside code blocks in CKEditor.

Autoformatting is a feature which allows users to use markdown-like syntax to format content in the editor. For example, a user could type the pound (#) character and then a space, and that line would be turned into a “Heading 1”. In CKEditor, the native Autoformatting command has slightly different triggers than the current editor. See the table below.

In the current editor, images could be resized using the up or down arrow keys on the keyboard. CKEditor doesn’t support image resizing with the keyboard.

Code blocks in CKEditor only support plaintext. Content that is inside code blocks in the current macro editor will be converted into plain text before being inserted into the composer.

You are no longer able to use the Tab key to indent text in the editor because pressing Tab opens the text formatting toolbar. You can indent and outdent text by opening the text formatting toolbar and clicking the indent or outdent icons, or by using these keyboard shortcuts: Cmd/Ctrl+] (for indent) or Cmd/Ctrl+[ (for outdent). If you are working with numbered or bulleted lists, pressing the Tab key can be used to indent.

Adding text after removing part of a hyperlink creates a new hyperlink. This is expected behavior.

Why is Zendesk making this change?

Zendesk is making this change to unify the technology used to power our editing experience. This will enable us to make composing messages and adding ticket comments as easy as possible.

What do I need to do?

You don't need to do anything. If you have a standard agent interface, the migration will be automatically activated in your account. To tell if you have the new composer, you'll see icons for adding hyperlinks and emojis in the composer window. 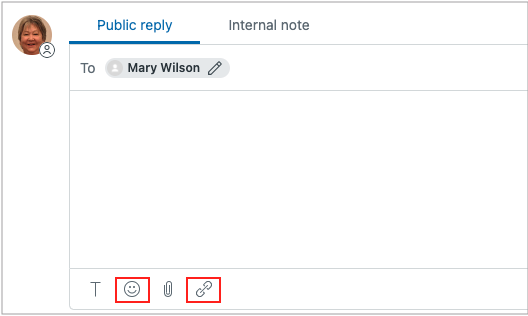 All accounts will be impacted by this change without exceptions. If you are using the Zendesk Agent Workspace, this migration has already occurred.