{"showBanner":true,"urlFilters":["/community/"],"type":"success","title":"Zendesk User Groups have launched!","content":"Connect, learn, and share with users like you. ","linkURL":"https://usergroups.zendesk.com/about/about-user-groups/","linkText":"Click here to learn more."}
Patrick Morgan

I'd love to see a simple, plaintext Annotations field in the Edit Article administration menu. Something like this: 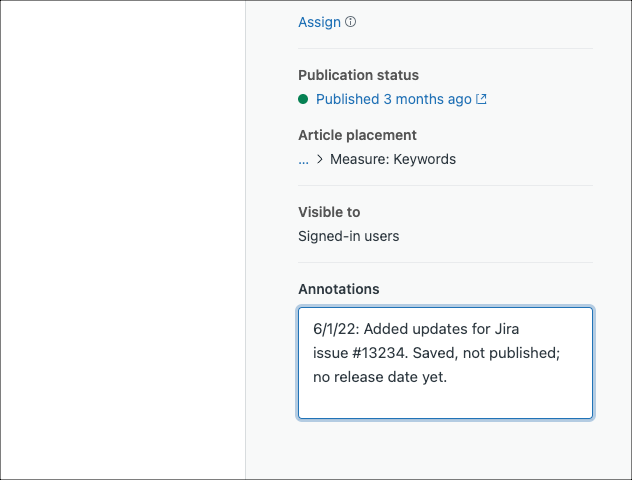 Making Updates to an Article Draft Across Multiple Sessions

Sometimes article updates require a lot of work. Knowing where a writer/agent left off (whether it's myself or a colleague) would help communicate the progress made to a draft during a single editing session. It's not always so simple to accomplish this using the Article History feature, which is also kind of buried.

Similarly, this kind of annotation would make managing updates to product-related Guide articles much simpler for teams in Agile development schemes. Since release dates are usually quite flexible, drafting content ahead of time and scheduling publication isn't always a great solution for us. Instead, I find myself making updates in advance, and saving the draft until I am sure when the relevant changes will appear in our product. This means I just have to remember whether I made the necessary changes OR I have to log a note in some other tracking system (for example, somewhere in the related Jira issue). I'd rather do this in the source of truth where I do my work: Zendesk Guide!

There are also times when several changes relevant to the same product feature are in progress on their own release schedules, and may involve multiple writers/agents making those updates. Annotations could help coordinate that work and prevent updates related to one piece of development from being made public inadvertently when updates for a different piece of development are published.

Presumably (lol), if it's a simple text string, it could also be added to a column in the Article Management screen. This kind of at-a-glance view would be a GAME CHANGER as a content editor/manager. I could open that screen up on Monday morning and know exactly where each article is in progress and be able to prioritize and assign that work as needed.

Down the line, potential enhancements could include seeing historical annotations with date- and timestamps saved to the article and associated with its own discrete "Article History" event type.

This suggestion is not dissimilar from the first use case described in Katarzyna Karpinska's pinned comment in the Internal Comments feature request. It sounds like those collaboration enhancements are under consideration at the moment.

However, I think this is request is less interested in improvements to the content creation/editing process than an addition to the metadata of the article itself.

I'd love to hear others' thoughts and about whether Zendesk would consider something like this.