Zendesk on Zendesk is a day-long discussion about a specific topic and how Zendesk Support uses Zendesk. This session is about how we manage Customer Satisfaction Survey and Ratings and is hosted by Anna Rozentale, a Support Operations Manager in our Dublin office.

The CSAT survey is sent directly to the ticket requester in, roughly, 24 hours after the ticket status has been changed to Solved (unless it’s been reopened). We can never be sure of the exact timing because the survey is sent by an automation that  runs once every hour and picks up any tickets that have been in a Solved state for over 24 hours. The automation’s title is Request customer satisfaction rating (System Automation).

This still allowed us to uncover the flaws and the feedback, see some praise but keep the noise to a minimum. However, the mechanism wasn’t properly communicated to the support team and created a negative feeling among them that their achievements weren’t recognized as much as the bad satisfaction ratings. It’s good to remember that CSAT can be a very useful channel for feedback but also a sensitive topic as your team members will often feel personally responsible for the ratings attributed to their tickets, and, again, it’s extremely important to communicate how you use the comments at company level. You can also use Satisfaction Reasons to that end and show your support team what is the ratio of support–related bad sat ratings to other reasons.

Fortunately, Zendesk is growing as a company and as a product and we’re moving ahead to meet the demands of the market. For us, as well as many of our customers, the simplicity of the CSAT survey wasn’t enough, so we’ve introduced bad satisfaction reasons. 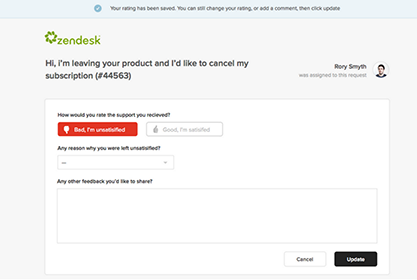 Let us know how you use the Customer Satisfaction survey and satisfaction reasons! What are some of the considerations when setting it up? Do you have programs in place to surface survey feedback internally and make sure it reaches the right people?