Working with problem and incident tickets

Problem-and-incident tickets are useful when a problem or service interruption is reported by more than one person. For example, when the wireless network in an office stops working, several people might file tickets. You can treat the tickets as incident reports. Instead of handling each ticket separately, you can link the tickets to one problem ticket, and then solve the problem ticket to solve all the incident tickets. 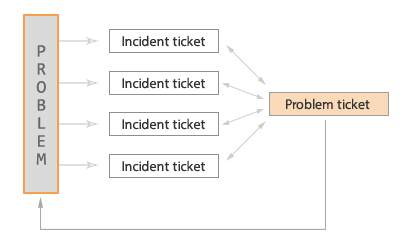 Tip: For advice on how to manage problem-and-incident tickets see Rani Sivesind's Full circle: The right way to use ticket status and type.