This section shows an example of how a ticket email thread may appear to your end users after you implement simplified email threading.

Suppose an end user submits a support request using Gmail and the agent replies by adding a comment to the ticket in Zendesk. In the original experience, the end user receives an email notifying them that their support request has been updated. The message not only shows the agent's reply, but it also repeats the user's original message as a threaded comment with the agent's reply. 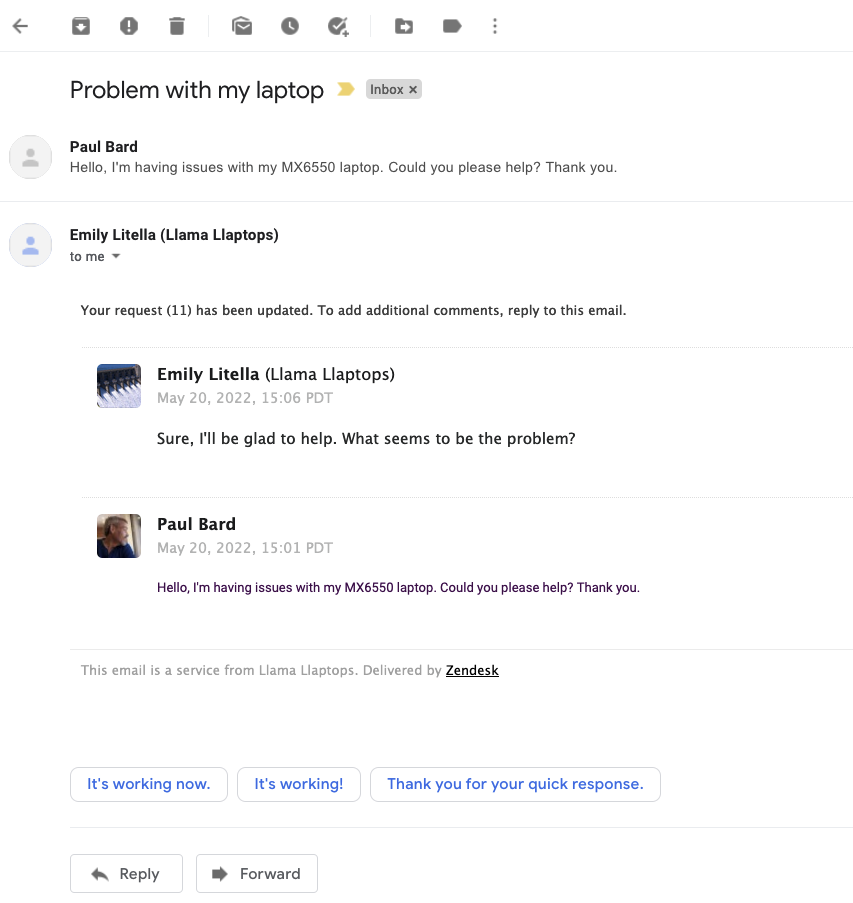 The simplified email threading experience is more conversational. The same interaction looks as follows in the end user's email application: 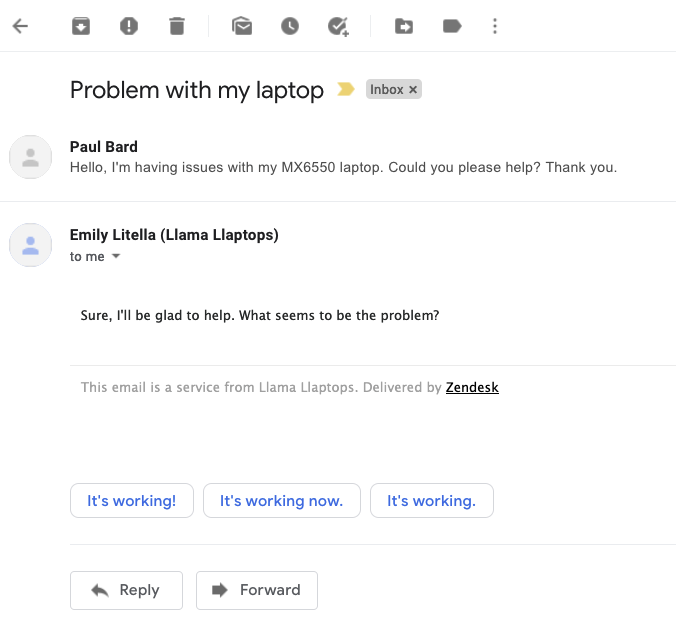 The difference is more noticeable when the end user adds a second comment and the agent replies to it. In the simplified email threading experience, the interaction looks like a normal conversation in the end user's email application: 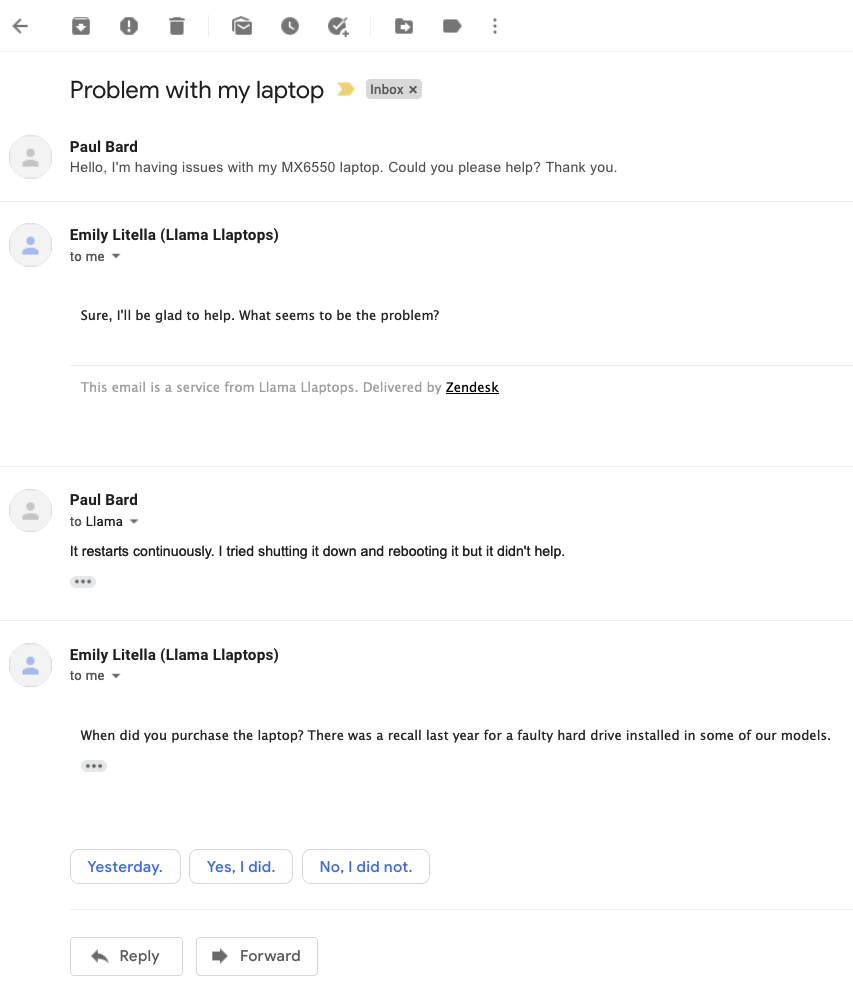 The same interaction looks as follows with the original email threading experience: 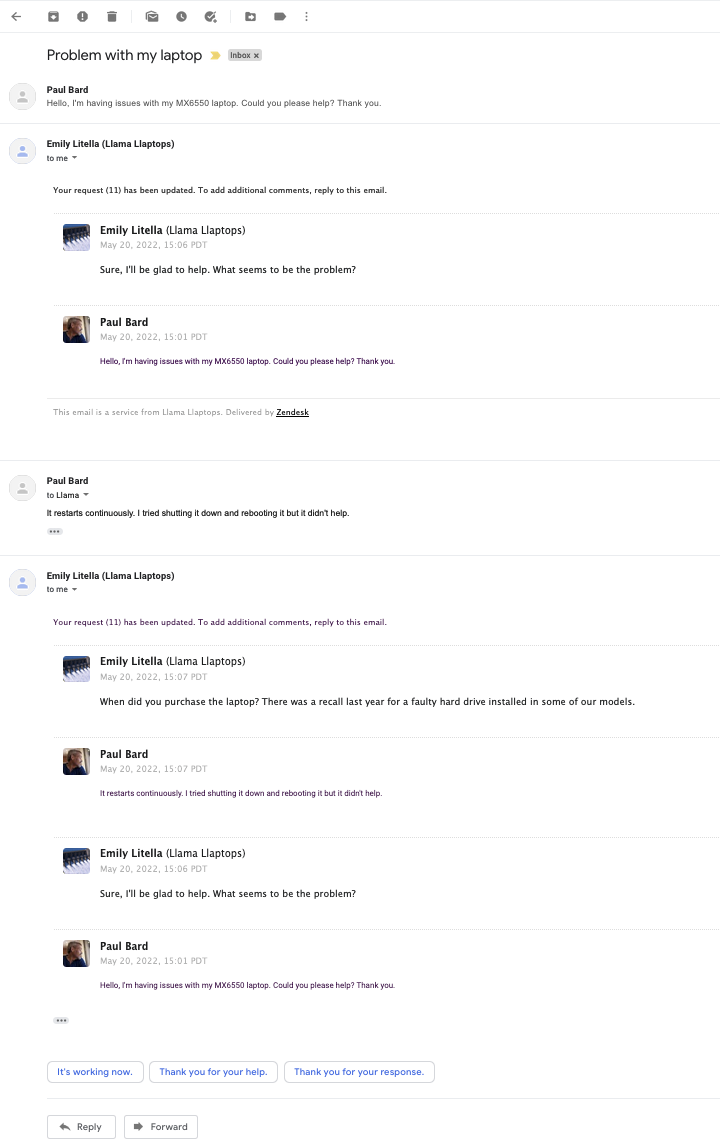 Including only the comment in each message allows the end user to better use the native threading capabilities of their email application. In long email threads in Gmail for example, only the first message and the last two messages are shown with an option to expand the thread. Example: 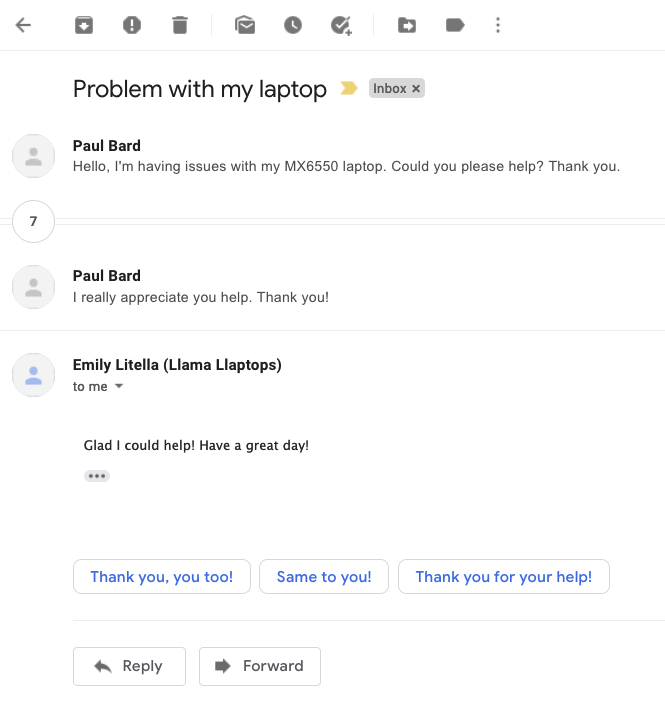 If an agent adds a user as a CC in a long conversation, the message shows the comment along with the three most recent public comments to give the newly added user some context of the conversation:

Zendesk also sends the message history as a quoted reply with each message. The quoted reply is usually collapsed in the user's email application, but the user can expand it. In Gmail, for example, the user clicks the ellipsis (…). In the unlikely event that Zendesk can't pull the entire message history to populate the quoted reply, a snapshot of the last three messages in the ticket is sent to provide context on the thread history.

Although agents work mostly in the Zendesk agent interface, agents routinely get ticket notifications in their email applications—for example, when a ticket has been assigned to them. In the simplified threading experience, email notifications sent to an agent include more information about the ticket, including metadata the end user does not have access to.

As in the end-user experience, each message sent to an agent only includes the comment made by a user or agent, not the complete email thread to that point. However, in the agent's case, the message also includes a ticket info card with key information about the ticket as well as a button the agent can click to view the ticket in Support: 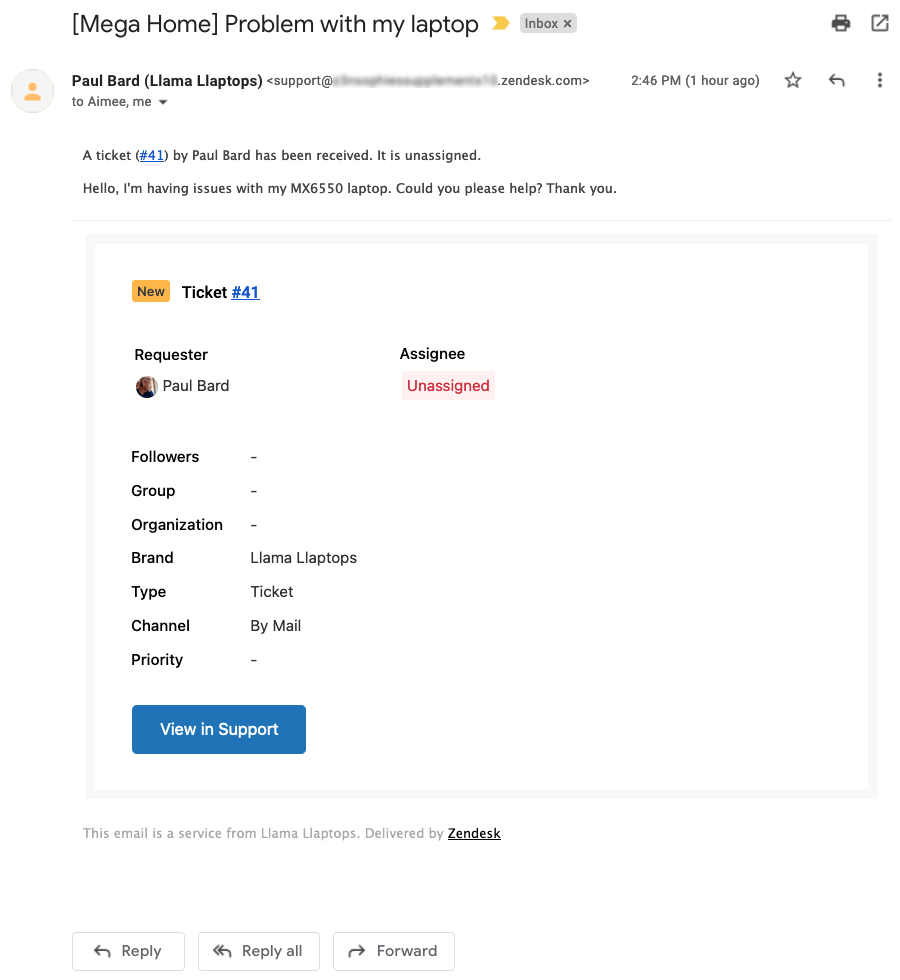 Internal notes and warnings can also appear. In the screenshot below, agent Jenny Kim hasn’t been included in the ticket, but has permission to view it and leave comments. She left an internal note for her fellow agents, which is indicated above her comment. Because she had not been added to the ticket before commenting, a warning appears at the top of the comment letting agents know her status. 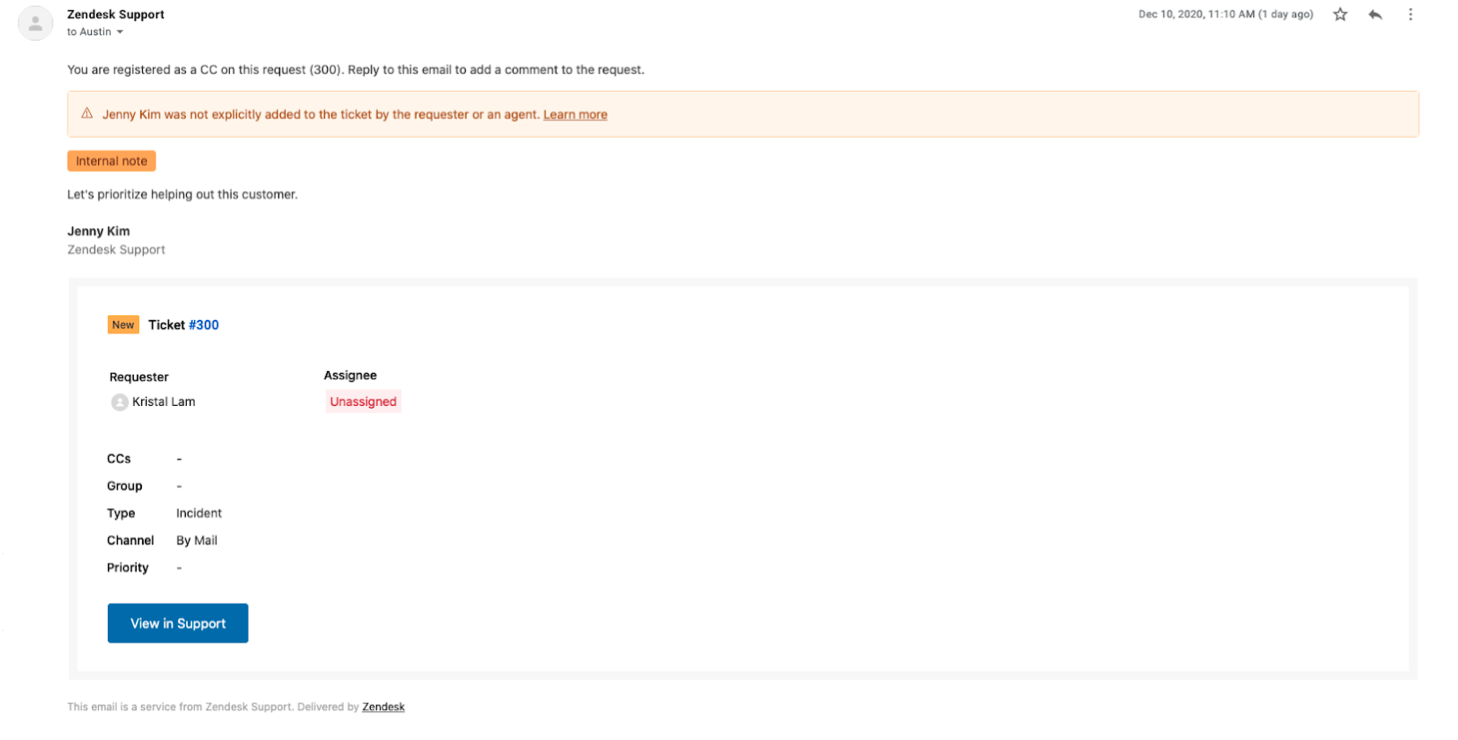 For comparison, here's a similar message in the original email experience: 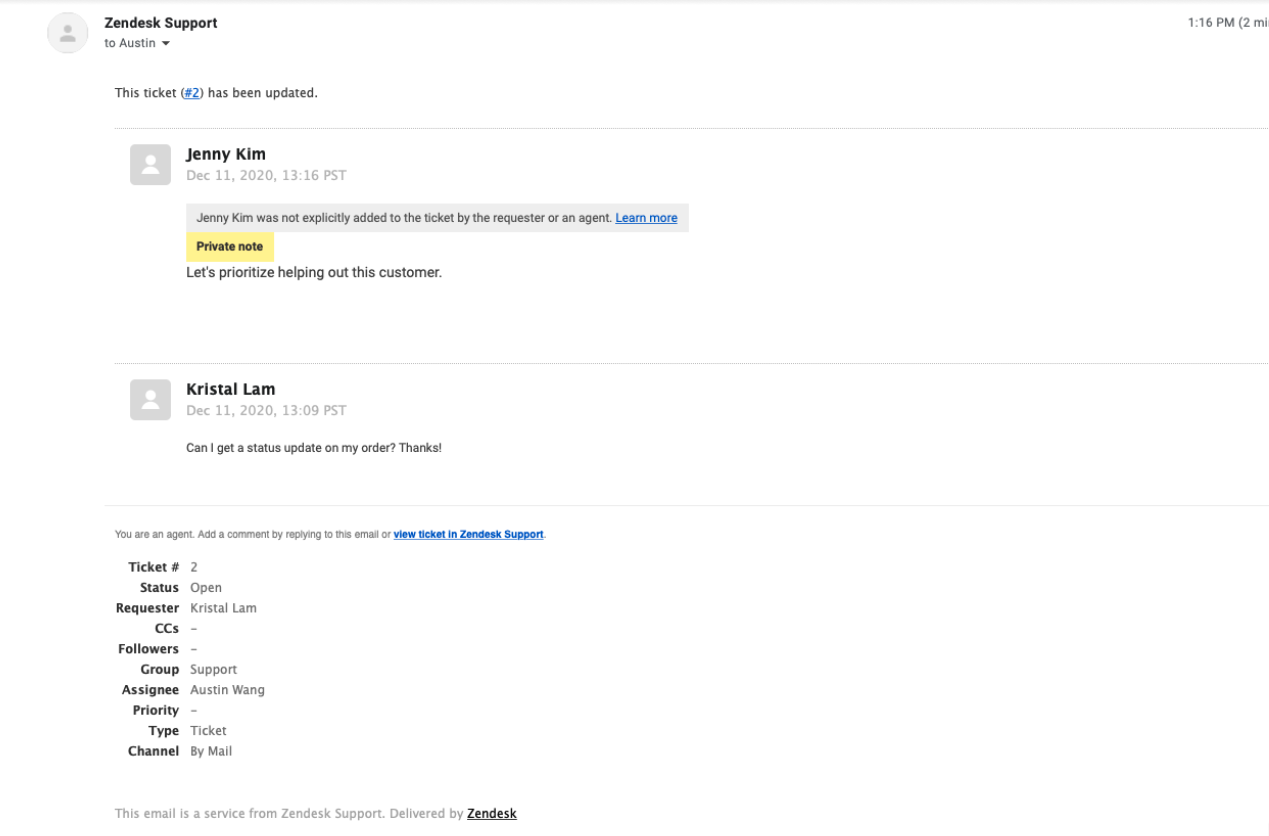