Automations enable you to set up time-based actions to modify tickets or send email notifications.

One popular use of automations is to perform an action a certain amount of time after the ticket is created or changed. You can do this using the "Hours since...is" or "Hours since...greater than" condition.

Note: You can also use "Hours since...is less than" but this article focuses on using "Is" and "Greater than."

To see an example of this, take a look at one of the default automations in Zendesk Support: Pending notification 5 days. You want the action, sending a notification to the user, to occur when the condition is met, five days after a ticket is set to pending. 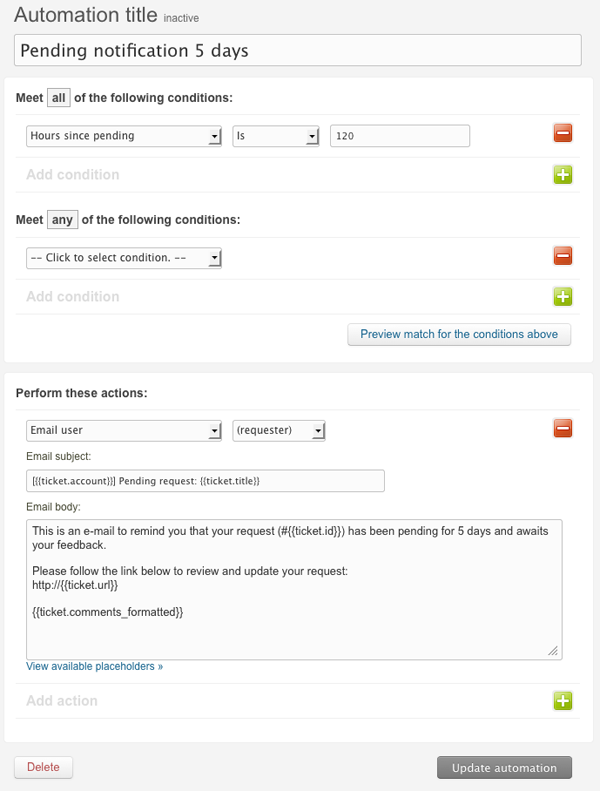 This same automation could be rewritten to use the "greater than" operator.

When you use "Hours since....is" in an automation, the automation fires (that is, performs action) a specific number of hours after a ticket is created or changed. For example, you can notify a support manager if a ticket has not been responded to after eight hours after it was created, or whatever your SLA is for first response.

When you use the "is" operator, instead of the "greater than" operator, it gives the automation a one-hour window during which conditions can be met and the automation will fire. You can specify whole hours only. You cannot specify partial hours or fractions of hours.

Remember, your automations run every hour and fire if the conditions are met. So when conditions are met, and the specified number of hours has elapsed, the automation will fire. There is an entire one-hour window during which it is considered exactly the specified hour (the hour plus 1-59 minutes), not a one-minute window (when it is exactly that hour and no minutes).

For more information, seeEnsuring your automation only runs once.

About using "Hours since...greater than"

When you use "Hours since....greater than" in an automation, the automation fires (that is, performs an action) when it is more than a specified number of hours since a ticket is created or changed. For example, you can remind a customer to respond to a pending ticket when more than 48 hours have passed since the ticket was set to pending.

When you use the "greater than" operator, it gives the automation a larger window—more than one hour—during which conditions can be met and the automation will fire.

For more information, seeEnsuring your automation only runs once.

Understanding when the clock starts

For example, let's look at an example using "is." Suppose you have an automation using that performs an action two hours after the ticket is solved. A ticket is solved at 9:15am and your automations run at 10:10.

So the automation in this example will actually fire at some point during the 12:10 automations run. That will be at least 2 hours and 55 minutes after the ticket was solved.

Now let's look at the same example using "greater than" instead of "is." Suppose you have an automation using that performs an action when it's been more than two hours since the ticket was solved. A ticket is solved at 9:15am and your automations run at 10:10.

Again, the actual time that the automation will fire and take action depends on the number of automations you have and your ticket volume.