Answer Bot gains much more functionality in the Zendesk messaging beta. Flow Builder, a click-to-configure tool allows admins to build custom conversational experiences between customers and Answer Bot, delivered across multiple channels and without writing a single line of code. The addition of Flow Builder allows you to configure how Answer Bot greets your customers, offer quick-reply options and pre-written answers to common questions, provide targeted article recommendations, and more.

In this article, we’ll introduce you to the Flow Builder tool, the out-of-the-box functionality available to you when Flow Builder is activated, and how your end users experience this increased Answer Bot interaction through the new Web SDK as well as your social messaging channels 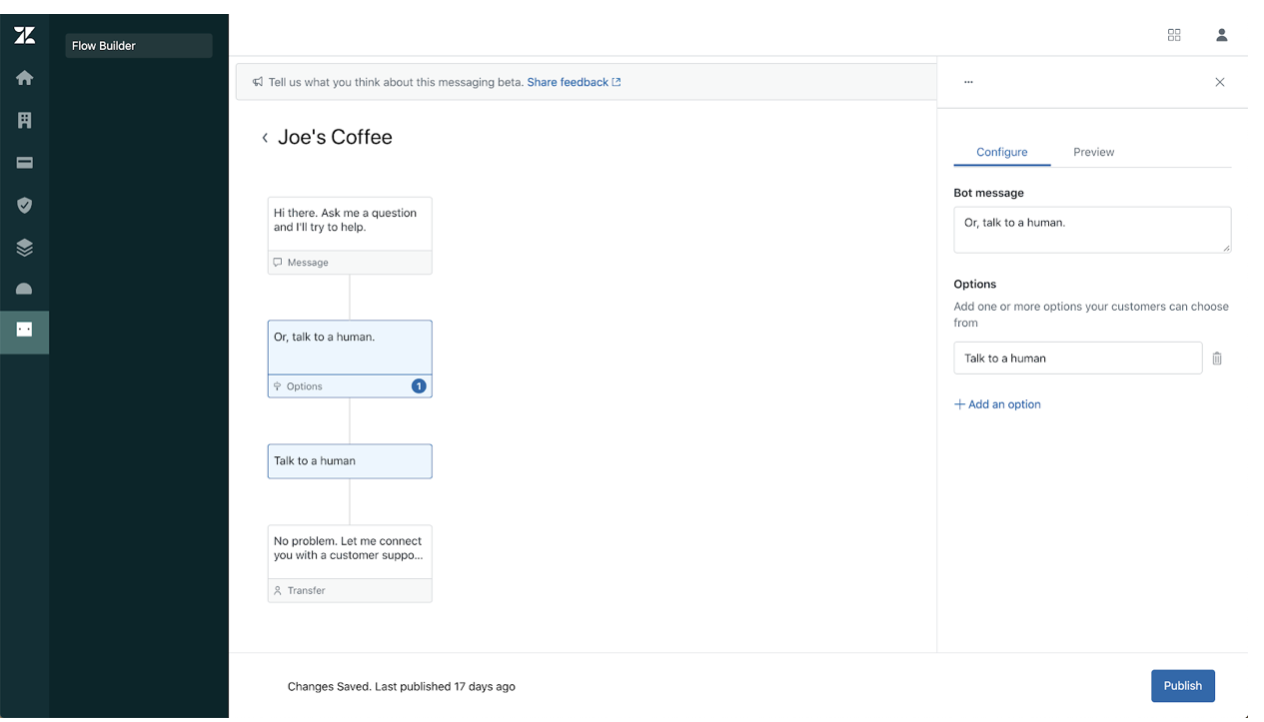 Flow Builder is activated automatically, on every active brand, as part of the Zendesk messaging enablement process.

Note: When Flow Builder is activated, without any further action on your part, a default conversational flow is also activated, and begins interacting with your customers, replacing your current Answer bot functionality in your Web Widget and Social Messaging channels. See The out-of-the-box experience for more information on this default flow.

Through Flow Builder, you can add the following steps to your automated conversations:

This flow is not static, however. Depending on user actions, a number of automated Answer Bot behaviors can be activated at any point in the conversation, including feedback prompts and useful responses to customers’ free-text entries. See The end user experience for more information.

While Answer Bot works in both the Web SDK and social messaging channels, there are some differences you should be aware of.

In the Web SDK:

Important: Social messaging channels do not have individualized automated conversations. They all use the conversation flow designed for the default brand.

Flow Builder comes with a simple, working flow for every active brand, so you can begin using Answer Bot through the Web SDK and social messaging as soon as Zendesk messaging is enabled on your account, without making any updates.

In Flow Builder, the out-of-the-box flow looks like this:

The default flow pictured above translates to an automated conversation in any enabled social messaging or Web SDK channels. For instance, when a customer launches the Web SDK, they’ll see the following: 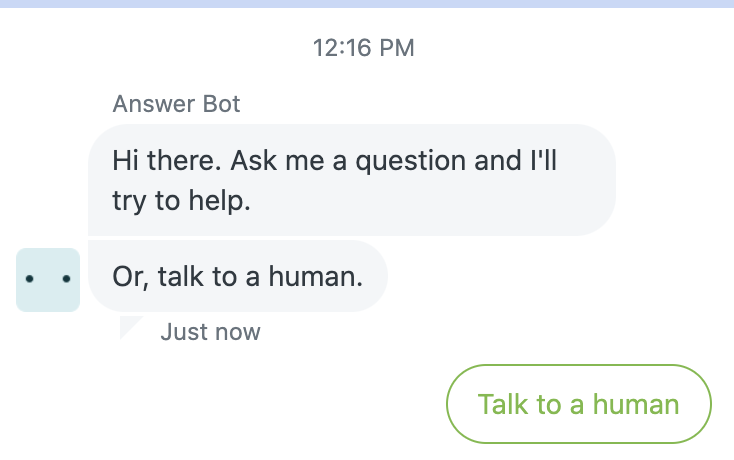 Here, the customer can select Talk to a human, which triggers the following response, as well as creating a ticket including the conversation history. 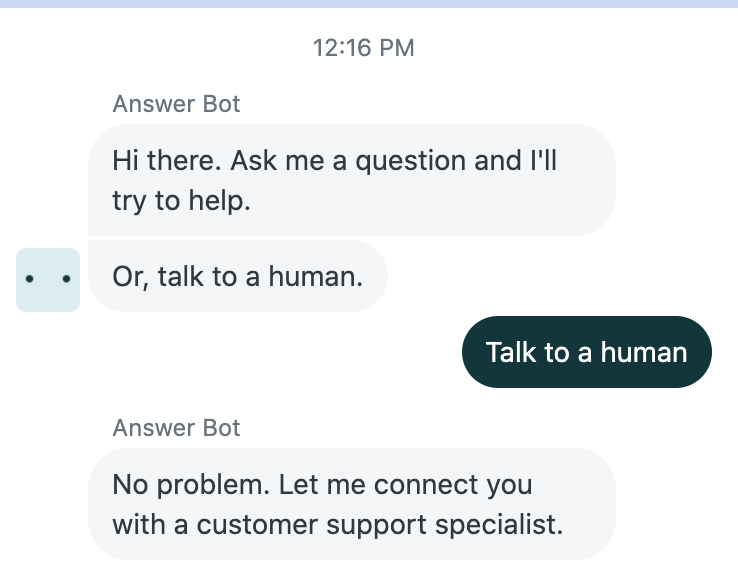 Customers are not confined to the automated conversation flow as designed in Flow Builder. There are additional interactions in a conversation between Answer Bot and the customer, as described below in The end user experience.

In this section, we’ll describe and illustrate each element end users may experience during conversations with Answer Bot.

It includes the following topics:

In conversations, you can offer preconfigured replies that the end user can select from, rather than typing in a response. These options can be used to represent common responses to questions, branch the conversation, or as a way for your end users to navigate through a conversation flow.

In the example below, a customer is contacting a scooter sales and rental company. Because the company knows that most customers want information on buying, selling, or renting a scooter, after the initial greeting they immediately offer three options: 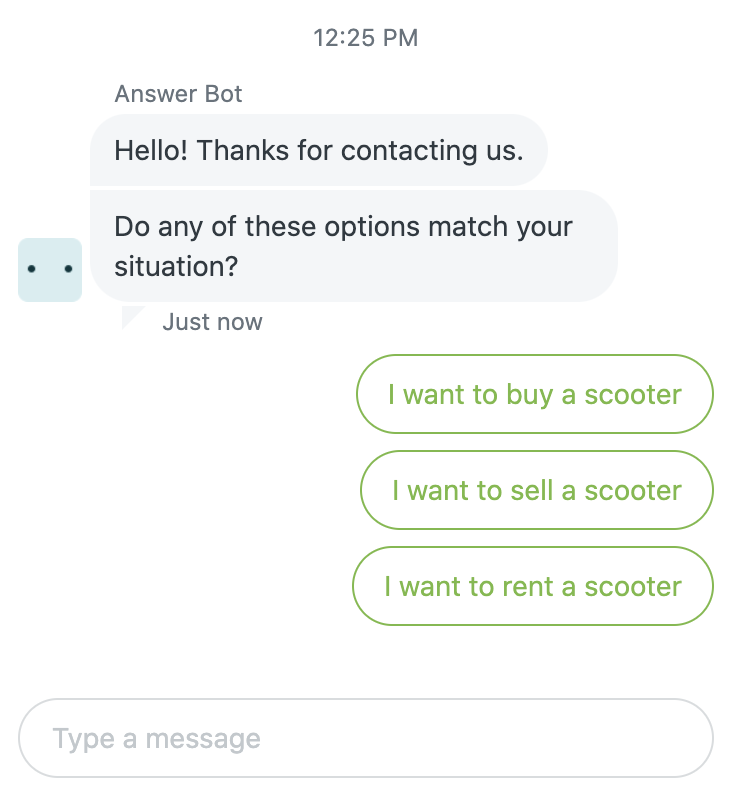 Quick reply options are configured in the Flow Builder.

Note that as a result of conversational shortcuts, typing the message “I want to buy a scooter” in the example above will have the same effect as clicking the quick reply. 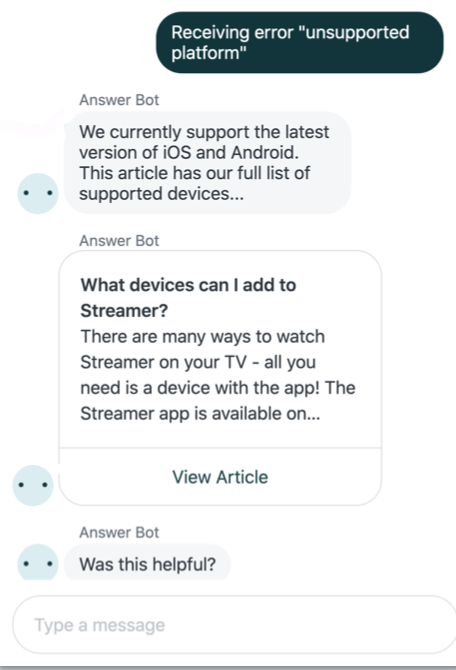 These replies can be added as message steps in the Flow Builder.

In addition to the original Answer Bot article suggestion functionality, with Flow Builder you can add an article step to your flow, which allows you to recommend up to six targeted articles at any point in the flow based on customer responses to options. In the image below, the customer selected a quick reply option, "I want to buy a scooter", and received a specific article recommendation in response: 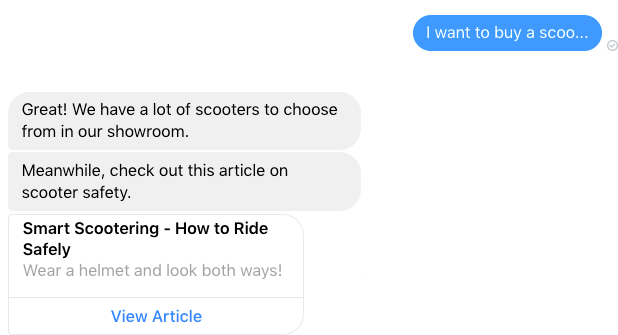 There may come a time in a conversation when a live agent must be brought in. In the example here, a customer has chosen a quick reply option that indicates they need assistance with upgrading their plan, which requires agent involvement: 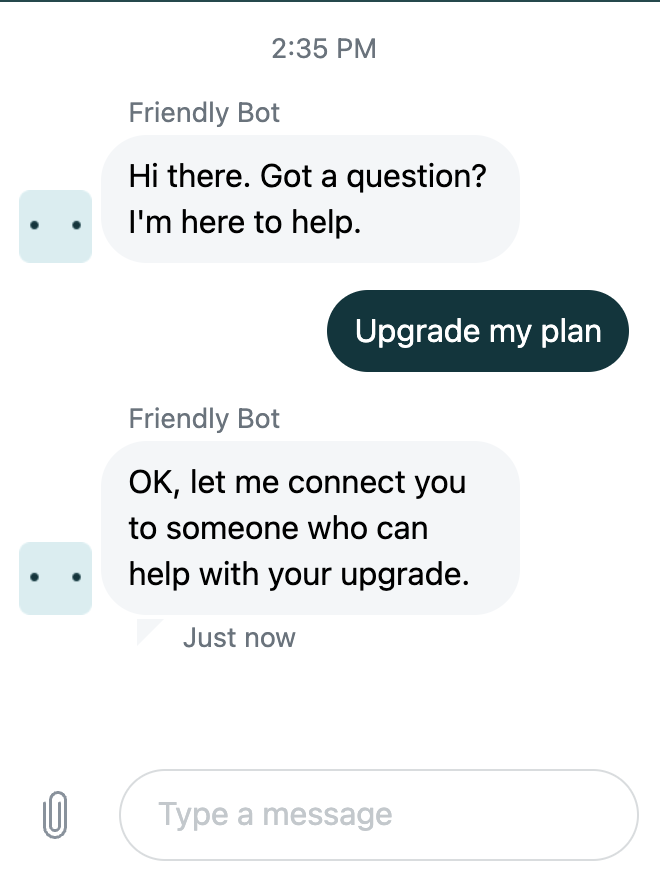 This step is configured in Flow Builder, and allows you to request information from the customer (in this case, username and name), and send a customized final message. As part of this step – unseen by the customer – a ticket is created, which includes their conversation history to help the agent address the issue.

Answer Bot automatically prompts for feedback after it has attempted to provide an answer, such as with an article suggestion or a direct reply.

The feedback flow is automatically enabled and cannot be customized.

After an article has been suggested, the end user receives the following prompt: 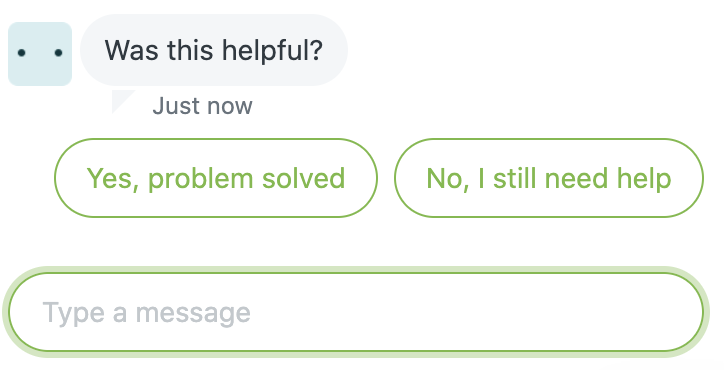 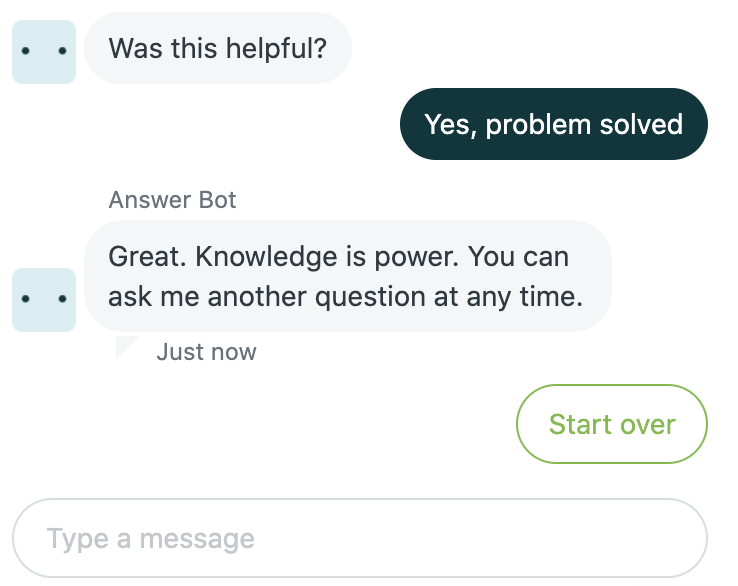 If the end user instead selects No, I still need help, they are shown a different automated acknowledgement and given the options to either start the conversation over, or talk to a human: 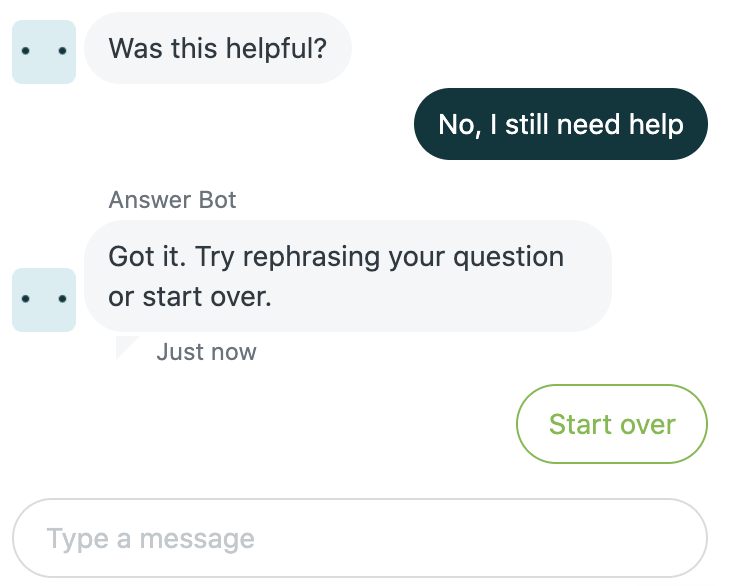 If the user clicks Talk to a human, they see a message acknowledging the selection and letting them know they are being transferred to a support agent: 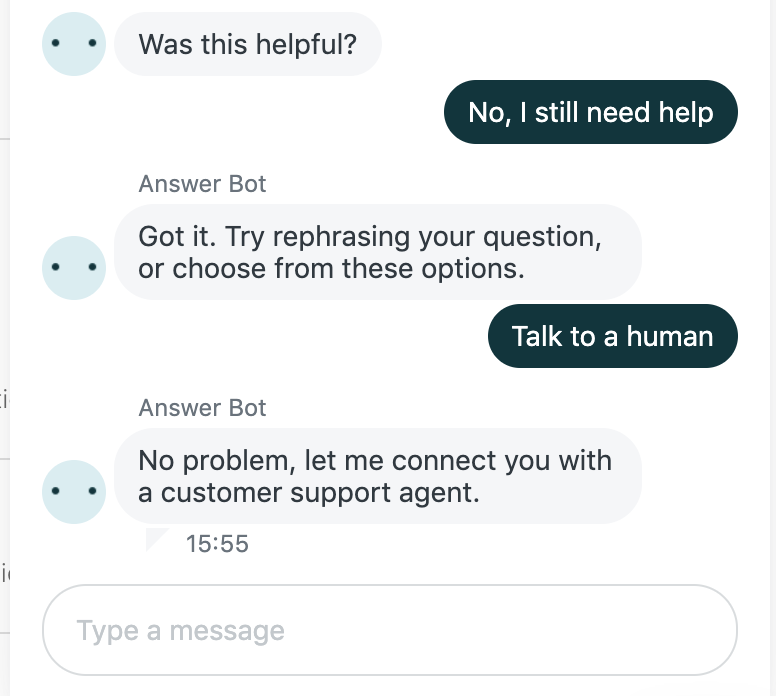 Additionally, a ticket is created, including the full text of the conversation.

Answer Bot uses AI to assess any free-text message entered into the conversation by a customer and automatically jump to the relevant part of a flow or to an agent escalation. Or, if there isn’t a related response in the existing flow, it will automatically suggest articles from your Help Center that may address the question.

In the following example, Answer Bot offers three options to a customer: I want to buy a scooter, I want to sell a scooter, and I want to rent a scooter. The customer instead wants to track an order they’ve already placed, and enters "track my order" rather than choosing one of the options: 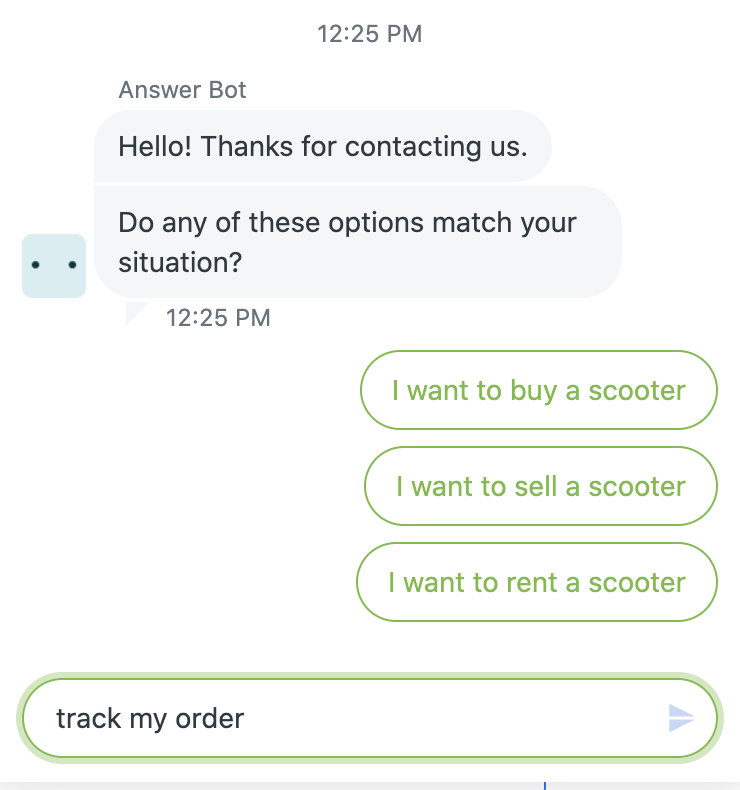 If the customer enters text that isn’t matched in the flow, Answer Bot looks to your Help Center articles for possible solutions. The customer can view the suggested article(s), and when asked through the feedback flow, indicate whether they self-solved their question or still need assistance: 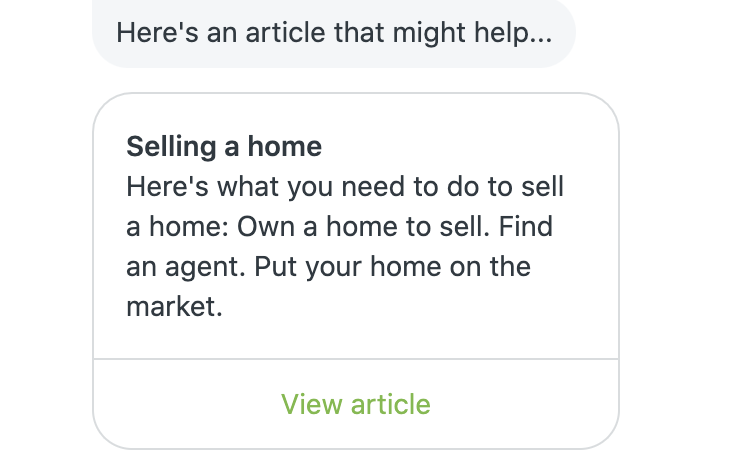 For information on how Answer Bot selects articles to suggest, see Optimizing your articles for Answer Bot.

If there are no relevant articles, Answer Bot sends a message offering alternative options to continue the conversation: