One of the steps in setting up your Zendesk is deciding how you want to configure end-user access. Based on the type of support you provide, you may allow anyone to submit support requests or you may limit it to a select group of users. You can configure Zendesk Support for either scenario. 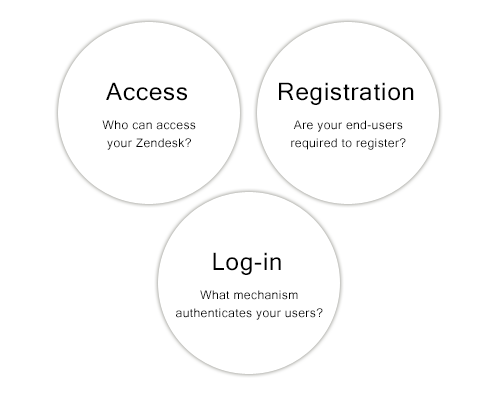 You have flexibility in all three of these areas, and the following sections explain each in detail.

You can set one authentication method for end-users and another method for agents and admins. For example, you can specify stricter password requirements for agents, who have access to more sensitive information, than for end-users. You can also provide different single sign-on options for each set of users.

You can also restrict the external users who can access your Zendesk Support instance. For example, you might want to allow only end-users from a specific email domain and then reject all others.

Setting up your Zendesk Support instance for all three options is described in the following topics:

You can require that your end-users register before they can begin a conversation with your Zendesk Support instance. This means that users must first register (sign up) with your Zendesk by providing their name and email address. 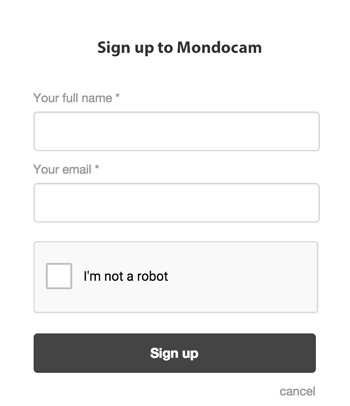 Note: If you started using Zendesk Support on or after August 21, 2013, this option is not available until you activate your Help Center. See Getting started with Help Center.
The registration process is started when an end-user does one of the following:

After signing up, end-users receive a welcome email message that prompts them to verify their email address and also create a password so that they can sign in to Zendesk Support.

Important: When you require your end-users to register, any requests that they submit to Zendesk Support before registering are sent to the suspended tickets view; they are not added as tickets in your Zendesk Support instance. Once the end-user has verified their email address, their future requests will create tickets. Their previous requests must be recovered from the suspended tickets view.

By requiring your end-users to register, you help to ensure that the support requests you receive are legitimate and not spam. Registration is not a guarantee that spam won't get through to your Zendesk, but other tools are provided to handle those that do manage to get through. See Understanding and managing suspended tickets and spam.

So what does the end-user gain by registering and signing in to your Zendesk Support instance? Doing so allows the end-user to do the following:
Note: End-users must allow third party cookies in their browser to be added as a new user when using an incognito or private window.

You can still provide support to your end-users without requiring them to register and sign in. They lose the benefits that registration provides but as far as your agents are concerned, the ticket workflow is the same. Many companies provide email-only support and never require their end-users to register because they don't want or need their end-users to visit and use their Help Center.

Note: You can actually do both: not require registration and also allow your end-users to use your Help Center. You'd do this by hiding all the sign-in access points into your knowledge base and then providing content that anyone can see. For more information about setting this up, see Setting up to provide email-only support.

Even though you don't require your end-users to register, a user account is created for each of them in your Zendesk. This is required of course because Zendesk (and you) need to communicate with them via email. The user account contains their email address and other personal data. These users remain unverified in your Zendesk, which is fine since you don't require registration.

When unregistered users submit a support request, they receive an email notification informing them that their request has been received. They do not receive the new user welcome email message. And, unlike when requiring registration, the ticket is immediately added to your Zendesk Support instance.

As we've shown above, there are a number of ways that your end-users can self-register in your Zendesk. In addition to self registration, your agents can also add end-users.

This can be done manually by agents. Administrators can bulk import a list of users using a CSV file or add users via the Zendesk API.

If you require registration, you can choose if you want the welcome email message sent to the end-users you've added. This is an admin setting called Also send a verification email when a new user is created by an agent or administrator. Choosing this setting prompts the end-users to verify their email and choose a password just as if they had created the user account themselves (in other words, to register with your Zendesk). If you don't require registration, you would not choose this option.

How you set up Zendesk Support (as open, closed, or restricted) also affects registration, verification, and passwords. For detailed information, see the following topics:

This is the user authentication that Zendesk provides and which was outlined above. You set your Zendesk account to require registration, the end-user signs up (registers) and then verifies their email address and creates a password. They then sign in to your Help Center using their email address and password. Zendesk takes care of authenticating the user and allowing them access to your Zendesk. You also have the option of setting the security level for passwords, password expiration rules, and so on. All user data is contained and managed within your Zendesk account.

2-factor authentication can be turned on for agents and administrators on an individual basis. After entering their password as usual, they'll be asked to enter a 6-digit passcode. The passcodes can be received in text messages or they can be generated by a two-factor authentication app installed on a mobile device.

Note: If an end-user or agent fails to enter their password correctly ten times in a row, they are locked out and cannot sign in again until they reset their password. If an end-user's or agent's password expires before they've had a chance to change it, they will be redirected to a Forgot password flow when they try to sign in.
For more information, see the following: 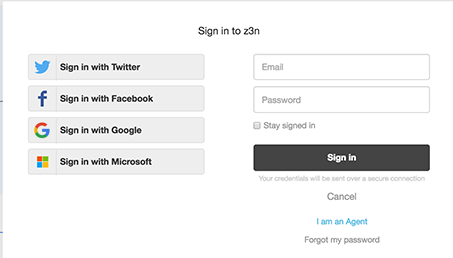 These social media sign-in options are provided as a convenience for your end-users so that they don't need to remember yet another password to sign in to your Zendesk.

The social media account, rather than Zendesk, is authorized to authenticate the end-user. Zendesk trusts Twitter, for example, to make sure that the user is who they say they are.

You also have the option of creating a locally hosted custom remote authentication script that connects to your external user management system. This is possible using JSON Web Token (JWT). Single sign-on is based on a shared secret between your local authenticating script and Zendesk. This secret is used to securely generate a hash (one-way encryption) that Zendesk uses to ensure that users who sign in to your account using remote authentication are who they claim to be and have been pre-approved to do so by implicitly knowing the shared secret.

If you prefer to manage your users and their sign-in to your Zendesk yourself, you have the option of using identity provider services such as OneLogin, Okta, and PingIdentity. These use SAML (Secure Assertion Markup Language) and either store all your user data or connect to your enterprise user management systems such as Active Directory and LDAP.

The only user data that is contained in your Zendesk is the user's email address or an external ID that you define.

For more information about setting up your Zendesk to use a SAML identity provider, see Using SAML for single sign-on.