Tip: Fine Tuning: Learn more about how you can optimize your Zendesk to best support your workflow in Don Newton's Brick-by-brick: How to piece together your ideal Zendesk, Part 1 and Part 2.

This article discusses the following tools:

It's common to get Zendesk Support requests for issues that affect more than one person and can be answered with a single, standard response. To do this in Zendesk Support, you use macros to create the standard responses, so agents can then apply them to tickets. Macros can also be used to update tickets without also notifying the requester. For example, you can use macros to change the agent or group assignment. See Using macros to update tickets for more information.

You can watch the video below for an introduction on how to create macros or find more information in Creating macros for tickets.

Below is an example of a macro that sends an email notification to the requester in response to an issue that affects many people in an organization: 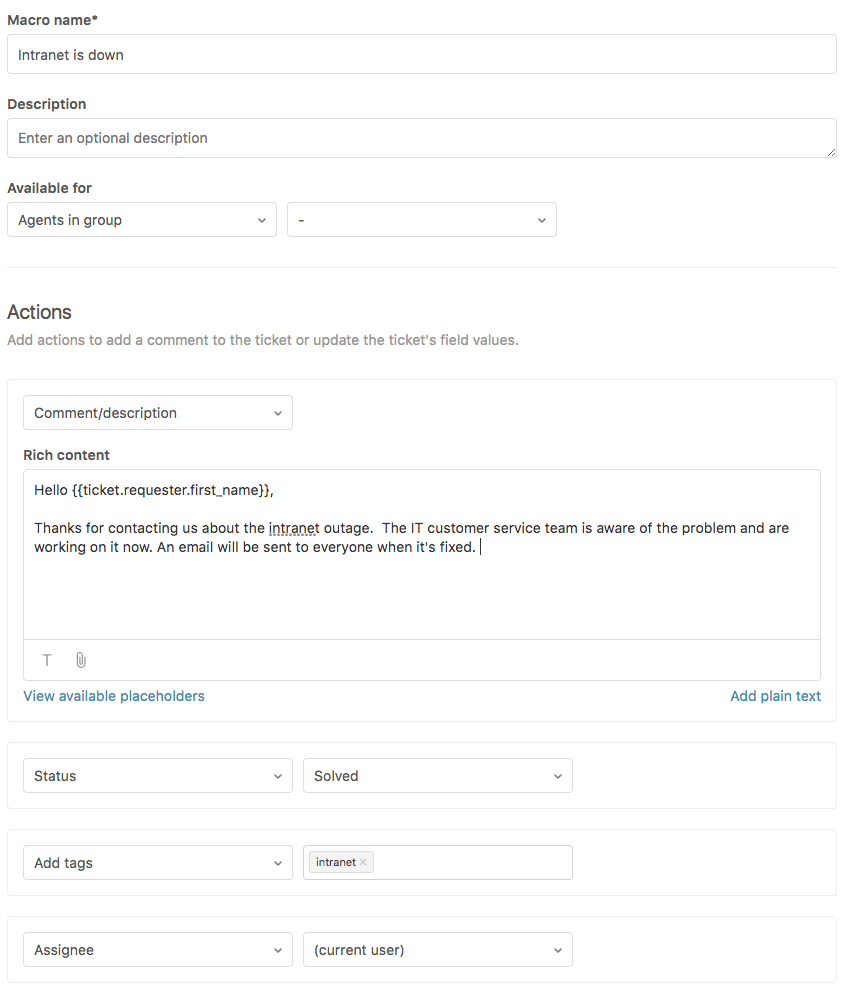 This macro adds a public comment to the ticket, sets the status to solved, and adds a relevant tag. You will see included in the comment the text "{{ticket.requester.first_name}}". This is called a placeholder and is used for automatically inserting data into an email notification. For this example, the placeholder would automatically insert the first name of the ticket requester in the email notification. For more information about placeholders and how they are used, see Using placeholders.

Triggering actions when tickets are created or updated

When a ticket is created or updated, you can automatically respond by modifying ticket properties and sending email notifications to the requester using triggers.

Triggers are built off of conditions and actions. Conditions define the criteria, and if the criteria is true, trigger the actions. In other words, if a ticket condition is true then perform actions, such as make changes or notify a customer or agent. For example, you can use triggers to automatically assign tickets based on a requester's email domain or keywords in the ticket description. See About triggers and how they work. 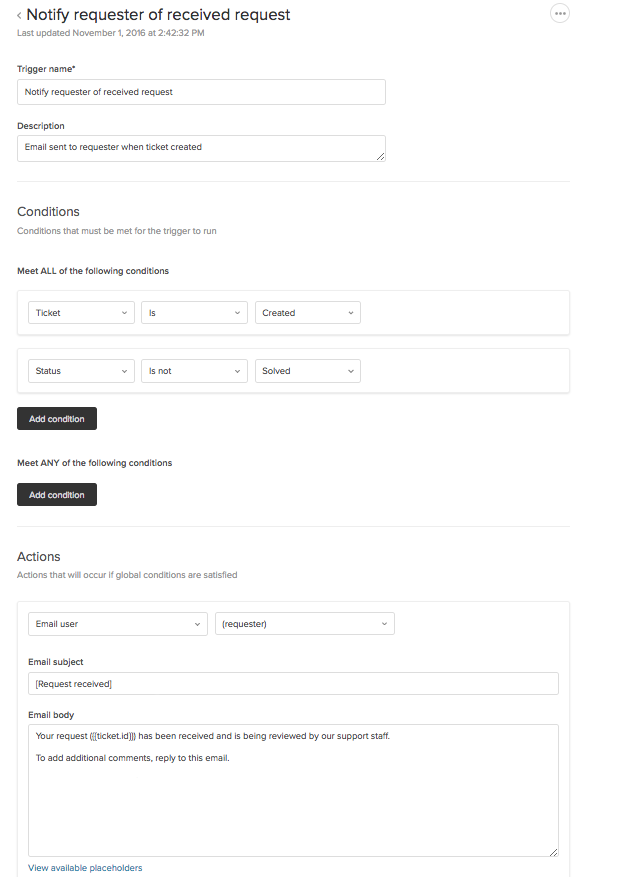 As you can see the conditions require the ticket to be created and the status to not be Solved. If those two conditions are true, the action sends an email notification to the requester informing them the request has been received and is now a ticket. You can use this trigger as is or clone it to make copies that you can modify and repurpose. If you need to, you can deactivate these default triggers or you can create entirely new triggers. See Creating and managing triggers for more information.
Note: Zendesk Support automatically runs through all of your triggers (from first to last) to see if each trigger's criteria is met. Whenever the ticket matches the conditions the trigger is fired. This means the actions of one trigger might affect the actions of other triggers. See Reordering triggers for information on selecting the order of triggers fired.

Automations, like triggers, contain conditions and actions. The image below shows an example automation that will automatically close a ticket four days after the ticket is solved. 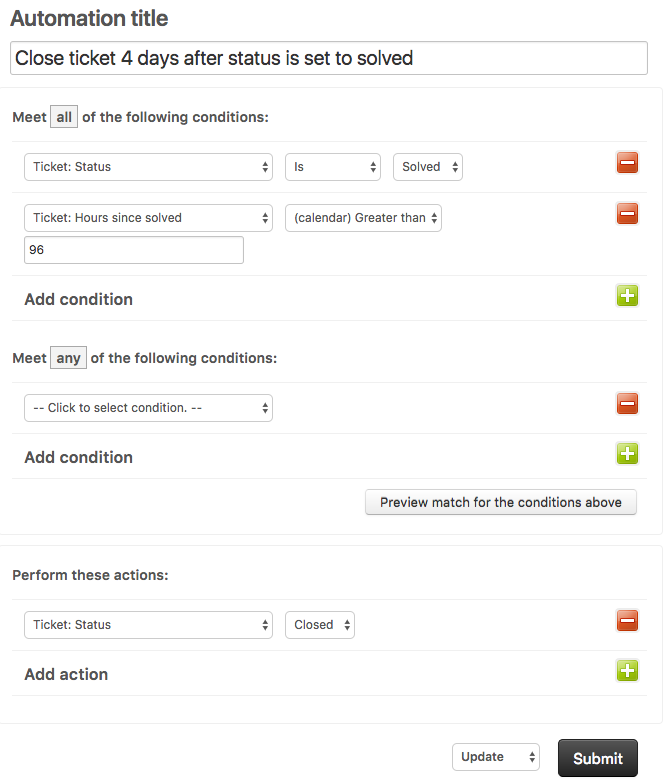 As you can see the conditions require the ticket to be solved and will activate after 96 hours, or four days, after the ticket has been solved. The action then changes the status from Solved to Closed. Four days is a best estimate for the minimum amount of time a ticket should remain in the Solved state before it is closed.

There may be times when you want to notify an external target about a new ticket or an important state change to a ticket. For example, you might want to send a text message or post a notification to a company-wide stream. By setting up external targets you can communicate with many cloud-based applications and services (such as Twitter and Twilio) as well as HTTP and email.

To help you categorize, act on, or search for tickets, you can add tags. Tags can be added to tickets automatically based on the words in the request, manually by agents, or via triggers, automations, and macros. Once added, you can create views by tags, search for tags and the tickets in which they are included, and use tags in your triggers, automations, and macros. See Using tags for more information about tags.

Tags are helpful throughout the entire support workflow, but are especially for the following support tasks:
Return to top
Have more questions? Submit a request