If enabled by your administrator, you can add a WhatsApp account to Zendesk Support to communicate with end users about support requests using WhatsApp messages.

This articles includes these sections:

The Social Messaging add-on and WhatsApp Phone Number add-on allows customers to use a company’s WhatsApp phone numbers to send support requests as WhatsApp messages. The messages become tickets in Zendesk Support, and then replies from agents are sent back to the customer through WhatsApp.

You can’t use the Social Messaging add-on to:

Note the following about how the Social Messaging add-on works with WhatsApp:

Before you reply to a WhatsApp ticket, it’s important to understand how replies are affected by WhatsApp’s 24-hour rule. This is a WhatsApp rule (not a Zendesk rule) that applies to all WhatsApp accounts (see this article from WhatsApp).

This rule states that:

This means that when using the Social Messaging add-on:

End user profiles include a field called Social Messaging User Info, which includes all of the user information pushed to Zendesk from the social messaging channels used by the end user to create tickets.

To view a list of social messaging tickets from the notifier

Ask your administrator whether your company has any shared views for social messaging tickets.

Replying to WhatsApp tickets from the ticket interface

Before you reply to a WhatsApp ticket, make sure you understand how WhatsApp’s 24-hour rule affects replies. Also, check with your administrator to find out whether your company uses triggers and automations that affect WhatsApp tickets.

To open a WhatsApp ticket from the social messaging notifier

To reply to a WhatsApp ticket from the ticket interface

In WhatsApp, a reply is called a message and a chat is a series of messages to a single contact or group. 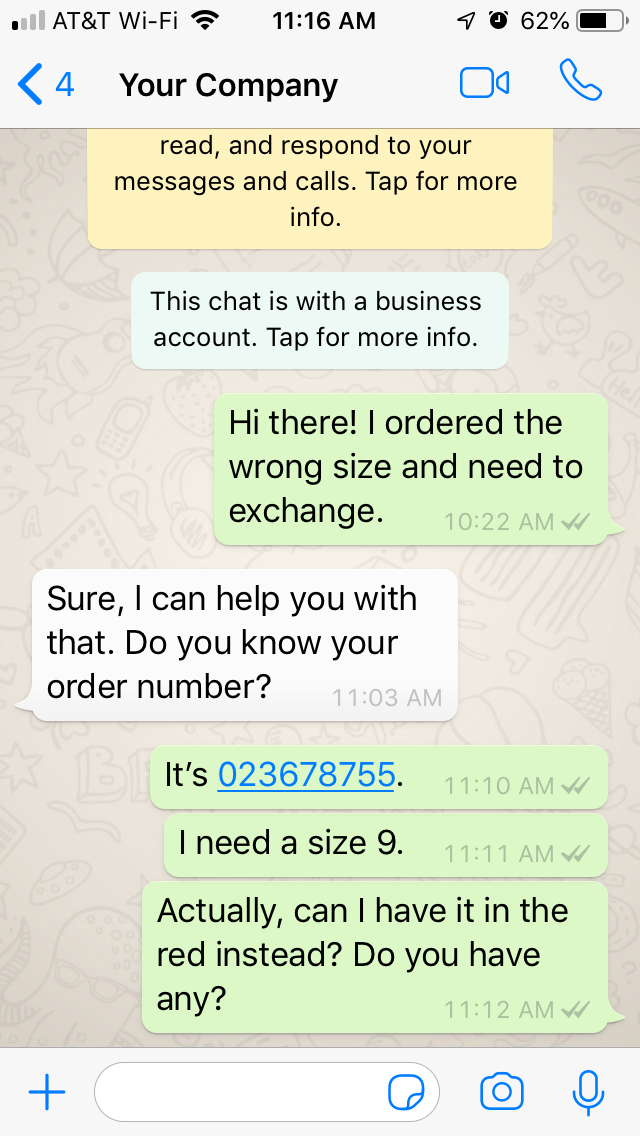 It’s important to know that if an end user forwards a single message from a chat to your WhatsApp phone number, only that message is forwarded to your Support account. You do not receive all of the earlier messages and attachments in the chat, but your end user may incorrectly assume that you do.

Here’s an example. This is what happens when an end user forwards a message on an iPhone:

Searching for tickets by WhatsApp number

You can search for end users based on their WhatsApp number, and then see all of the tickets associated with that end user. The search results will include both WhatsApp tickets and non-WhatApp tickets.

Note: There is no method for running a search that shows only the WhatsApp tickets associated with a particular WhatsApp number.